This bulletin includes corrected data for April to December 2020.

Employee cases in January to March 2021 were split quite evenly between 'fast track', 'standard track' and 'open track', whereas in April to June 2020, fast track case numbers were almost double that of either open or standard track case numbers. This gradually evened out across the quarters presented in this bulletin. January to March 2021 is also the only quarter in this bulletin to have higher numbers of open track cases than fast track cases. 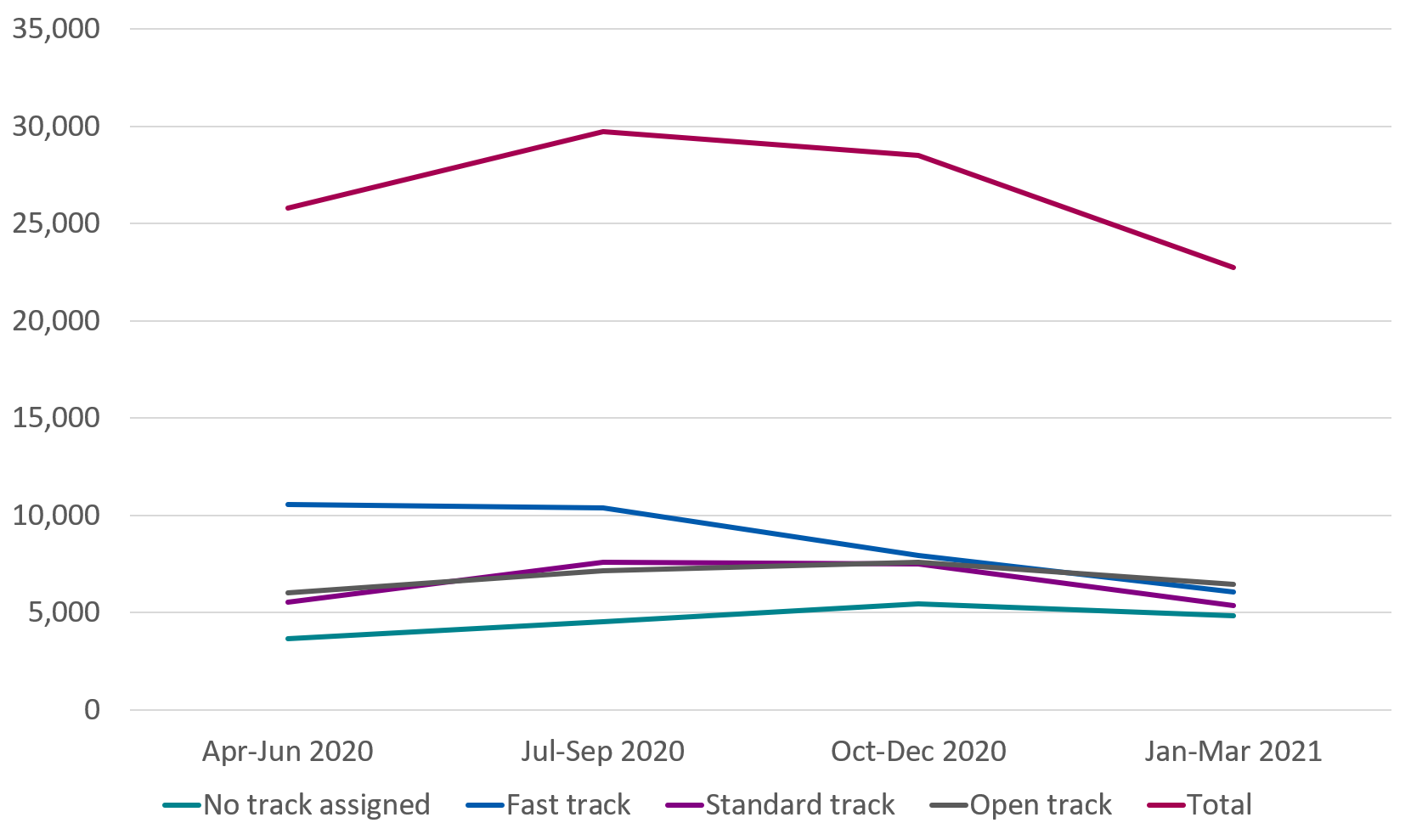 Employer-led early conciliation notifications made up less than 4% of EC notifications in January to March 2021, a similar rate to October to December 2020. Standard track cases made up the majority of employer-led cases with more than 60% of cases being standard track across all 4 quarters. Case numbers fell by 25% in January to March 2021, compared to October to December 2020. 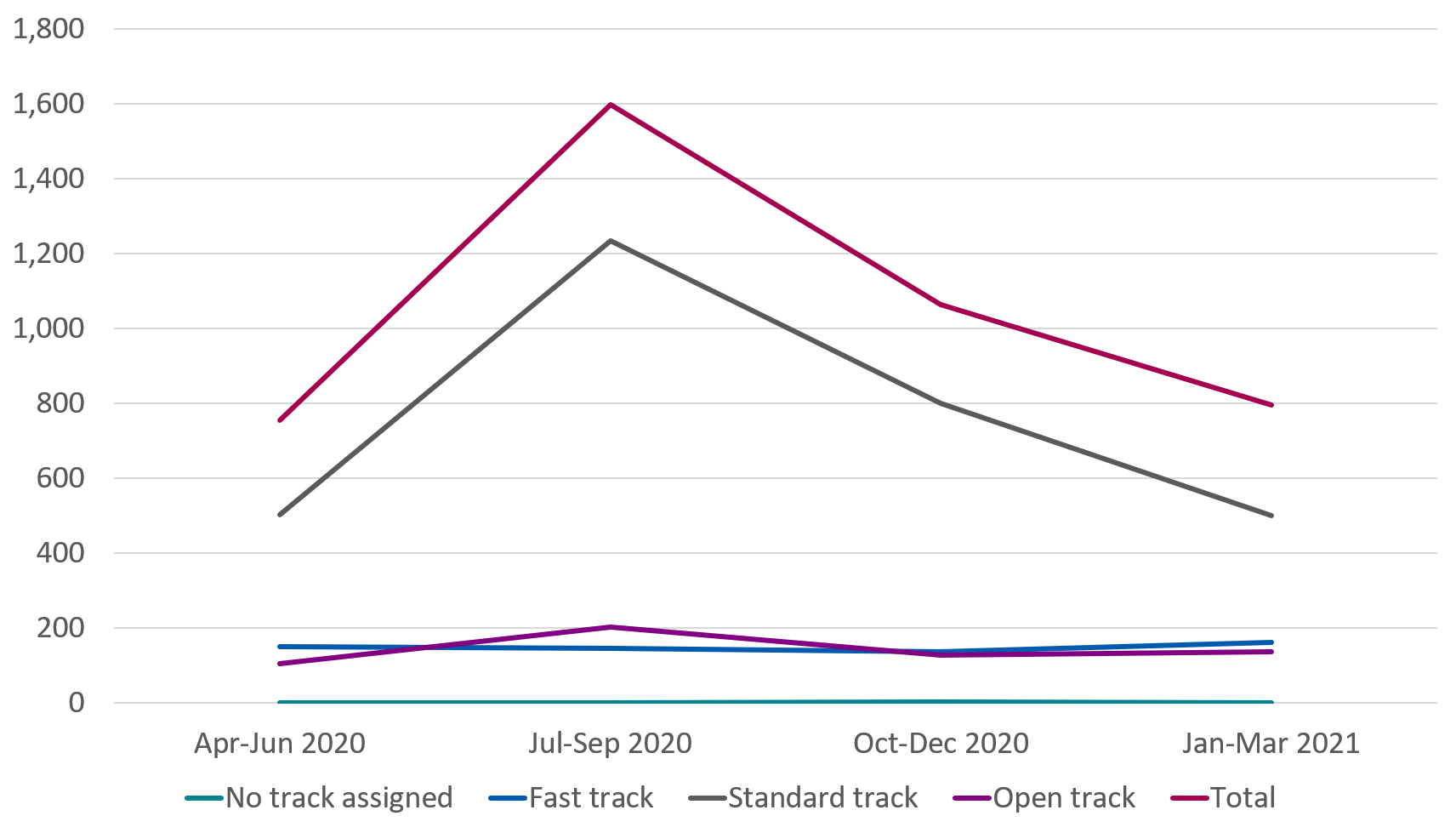 In January to March 2021, 22% of early conciliation cases were closed without parties engaging in early conciliation, down from 24% in October to December 2020. This is the lowest rate across all quarters presented in this bulletin.

Across all 4 quarters, mainly cases with no track assigned did not progress to conciliation. These are where Acas has not been able to get in touch with the claimant to gather enough information to assign a track, so this is to be expected.

Figure 3: Early conciliation notifications that have not progressed to conciliation by track along with total conciliated case numbers per quarter from April 2020 to March 2021 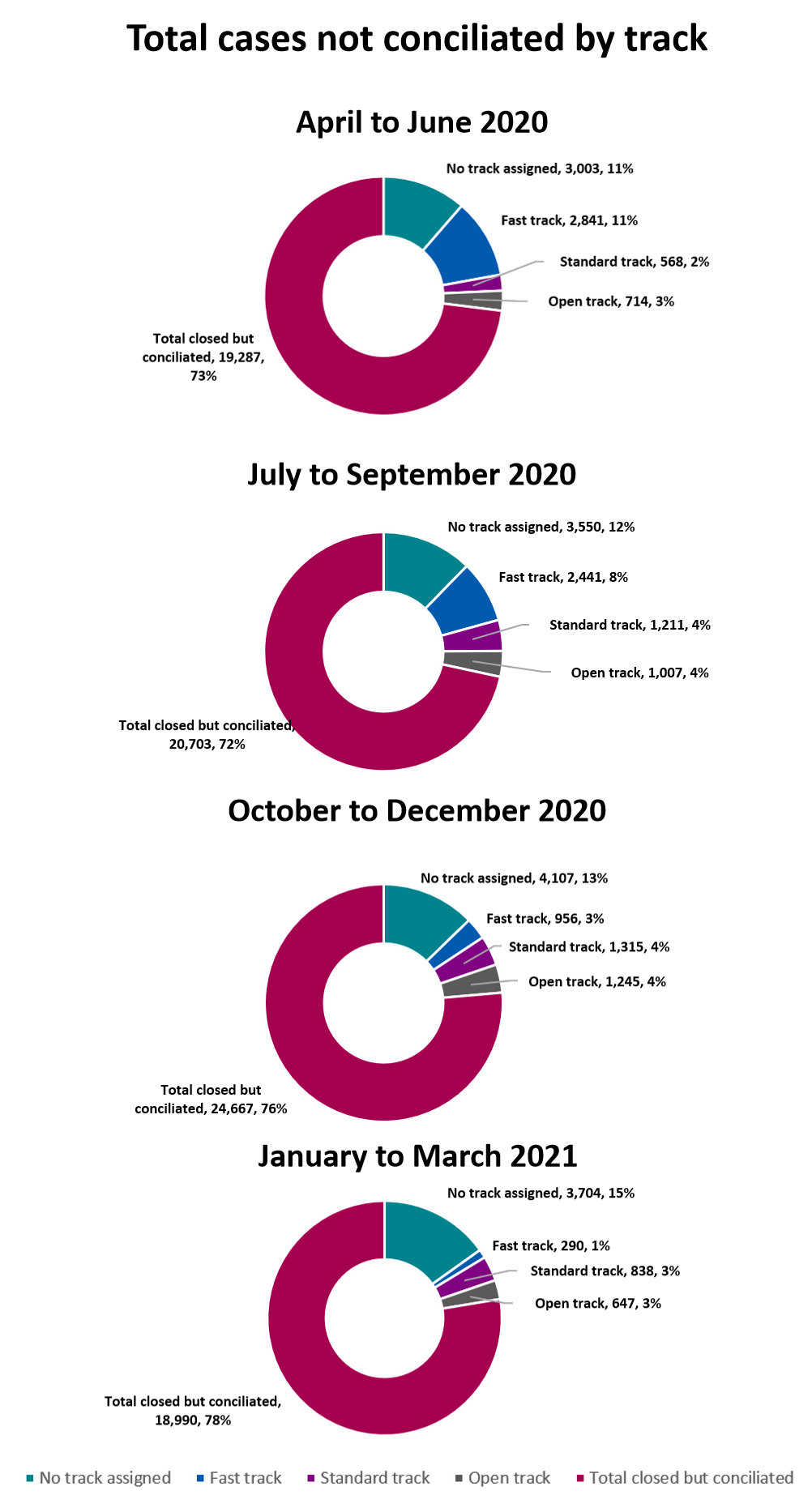 Table 3: Early conciliation notifications that have not progressed to conciliation by track along with total conciliated case numbers from April 2020 to March 2021

Due to the potential time lag between an EC certificate being issued and the corresponding ET1 reaching Acas, these data cannot be accurately reported until after a period of time has elapsed and so are 1 quarter behind all the other statistics in this bulletin.

Almost 70% of cases did not lead to the submission of an ET1 throughout April 2020 to March 2021. Of those with an assigned track, the fast track cases were most likely not to progress to ET1, although there were high rates across all the tracks, with at least 62% of cases not progressing to ET1 for open track cases from April to September 2020.

Employment tribunal claim form receipts dropped 13% in January to March 2021, compared to October to December 2020. The highest level of ET1 receipts was received in October to December 2020 with 10,359 cases. This was more than 60% higher than in April to June 2020, the lowest number received during the quarters in this bulletin. The highest proportion of ET1 receipts during all the quarters presented in this bulletin were open track cases, with fast track cases the lowest proportion. 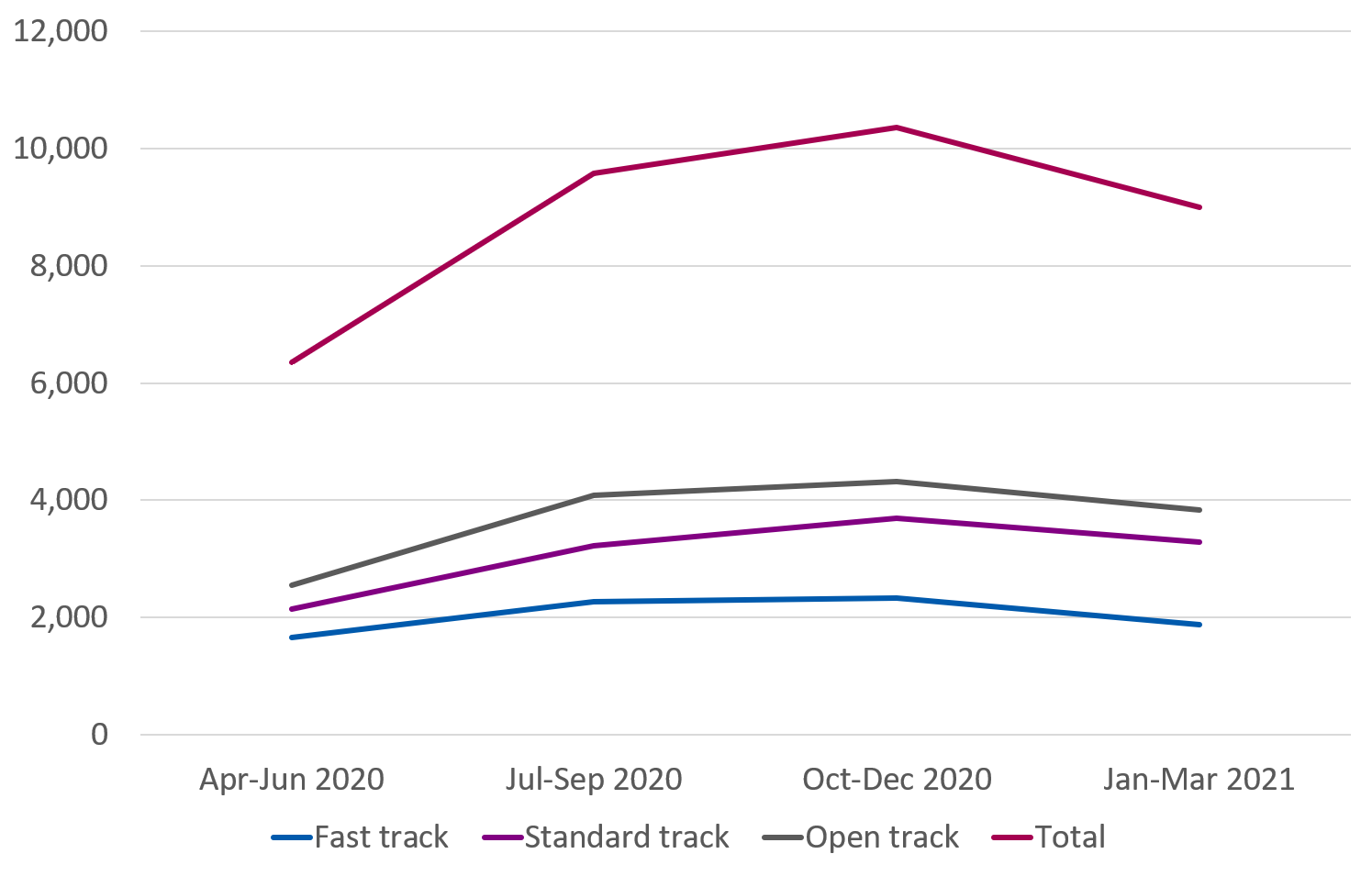 Note:  Figure 4 is a visual representation of the data in table 5.

Although the changes are minimal, this is not outlined in the methodology article. The figures published from this point onwards will be final.

We have made an additional change to the criteria for establishing the base data for table 4. Previously, we did not include non-progressed early conciliation cases that had not used conciliation. To mirror the data in our annual report, we have decided to include these cases, which has increased the number of 'ET1 avoided' cases for all tracks. No other changes have been made.

The column headers in table 6 were not lined up correctly in the last bulletin, so data was assigned to the wrong quarter. This error has been corrected in the updated table 6 in this bulletin. Other tables were not affected.

Court of law charged with hearing cases within employment jurisdictions although cases with monetary value may be heard elsewhere.

Form used by claimants to make a claim to an employment tribunal. The form is copied to Acas to allow ET1 conciliation to proceed until either the dispute is resolved or a legal judgement is reached. It’s free to submit an ET1.

Acas has a duty to attempt conciliation between the claimant and their employer once an ET1 has been submitted and passed to Acas. If a settlement can be reached or if the claimant agrees to withdraw their claim, the dispute is considered to be resolved. Otherwise it will proceed to an employment tribunal hearing.

Cases which have been grouped together for conciliation because they are against the same employer and relate to the same dispute. Claimants in groups are the number of claimants represented by these group claims.

Legal classification of the type of dispute a claim is made about. One case may contain more than 1 jurisdiction. For example, an unfair dismissal claim may also contain a claim under the Wages Act for unpaid wages. This could be changed in an employment tribunal.

More quality and methodology information is available on the: